The electromagnetic buzzer generally consists of a plastic housing with a metal diaphragm that is flexed by an electro- magnet. The main benefit of this design is the ability to obtain low frequencies in a small package. Drawbacks include mechanical wear, electrical noise, lower sound output, and large power consumption.

Difference between active and passive:

A piezo buzzer generates sound because of the piezoelectric effect from the piezoelectric ceramic which drives the metallic diaphragm to vibrate.
A magnetic buzzer is based on the electromagnetic principle, the metal diaphragm is pulled when input the power, and spring back without power.
The piezo buzzer is driven by square waves, and the magnetic buzzer needs 1/2 square waves to drive.

We suggest inputting higher voltage for a piezo buzzer, normally over 9V to have enough SPL. On the other hand, a magnetic buzzer can be driven to generate 85 dB by only 1.5V, but the consumption of the current will be much higher than Piezo one.
To compare the two types of buzzers, the magnetic type can have lower frequency response with the same dimension.
Though being limited by the dimension, the SPL of a magnetic buzzer can only reach to 90 dB. The piezo buzzer can achieve the SPL of 120 dB in some spec., some larger size can also easily reach to 100 dB. 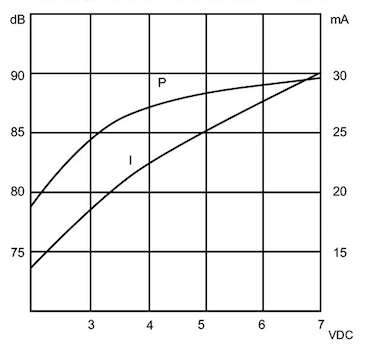