The carbon film resistor is a type of fixed resistor that uses carbon film to restrict the electric current to certain level. These types of resistors are widely used in the electronic circuits.

Carbon film resistors are a significant improvement on carbon composition. However, in comparison to metal film and metal oxide film, the commercially available range steadily decreases. Metal and oxide film are not more expensive to produce, and have overall better properties.

Carbon film resistors are made with a deposition process. At high temperature and under a high pressure, a ceramic carrier is held in hydrocarbon gas. The gas (methane or benzene) is cracked at a temperature of 1000℃. The crystalline carbon is pyrolytically deposited on the ceramic substrate. Because of the precise distribution of the pure graphite without binding, these carbon resistors have a low noise. The desired resistance value can be obtained by choosing the right layer thickness, and by cutting a spiral shape in the carbon layer. The helical cut in the film increases the length of the current path. By decreasing the pitch of the helix, the length of the resistive path increases, and therewith the resistance value increases. Furthermore, by fine tuning the cutting of the spiral the resistor can have a higher accuracy of resistance value. Typical tolerance values for carbon film resistors are 2, 5, 10 and 20%.

Typical use for carbon film resistors is in high voltage and temperature applications. Operating temperatures are up to 15kV with a nominal temperature of 350℃. Examples are high voltage power supplies, radar, x-rays and laser. 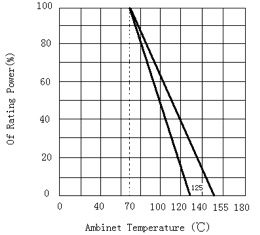